This is my place to share some of my articles that I write at my blog place.  You'll find a link to the right to my TraceBook and below this...my blog.  Here I have added my most recent.  Stop by.  A bit of humor and hope...home-made! Hang with me. I have walls to lean on and posts that are off the hook. Where I hope to humor you with character! And I'm quite a character! My writings? Well, I call them sourneyalizings. My journaling about my sojourns and journeys...and the joys I find in the pain.  Some northerners, like me, might call them sojoyneyalizings. My stuff? Always off the cuff and a little on the fringe. But, authentic! I'll give you the shirt off my back. You will have to roll up the sleeves cuz that's where I wear my feelings. On my sleeves above my fingerless gloves! My home? Home to the 8 senses: our music touches most senses, humor is the 7th one, nonsense. The 8th? That's my 2 cents.  Trace
Tracy Lynne Glenn 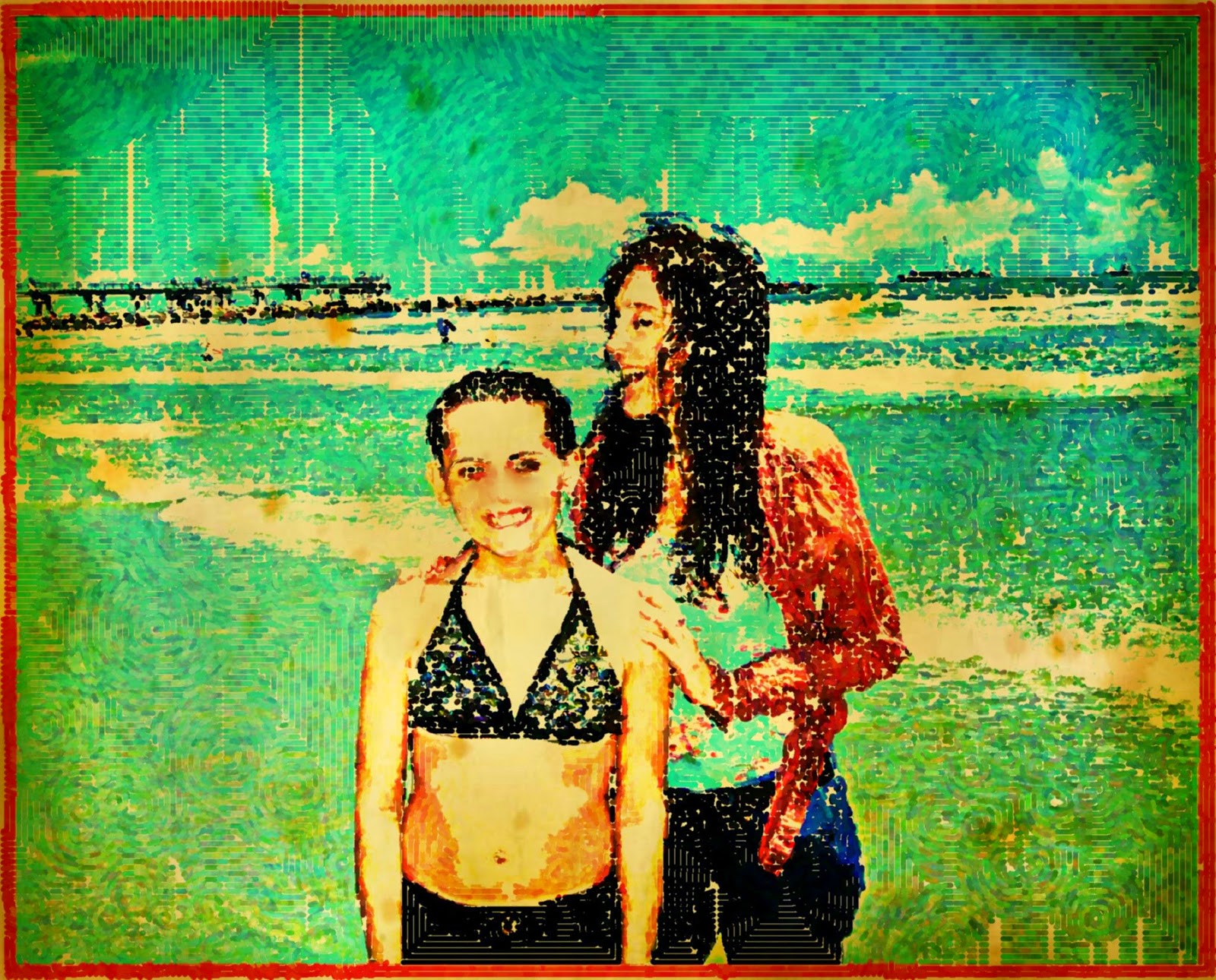 The thing about things is that the things that used to be important? Become people. And, the things you do with them and for them that bring about a smile on their face or in their hearts. Or, both. That's my thingism for today, people. You may go back to doing your thing! Oh. And, BTW? I combined a few free software edits on this to get a mosaic feel. Another of my things. Signed, She Has A Thing For Most Ev'rything & A Thingism For How Things Is...mhmm 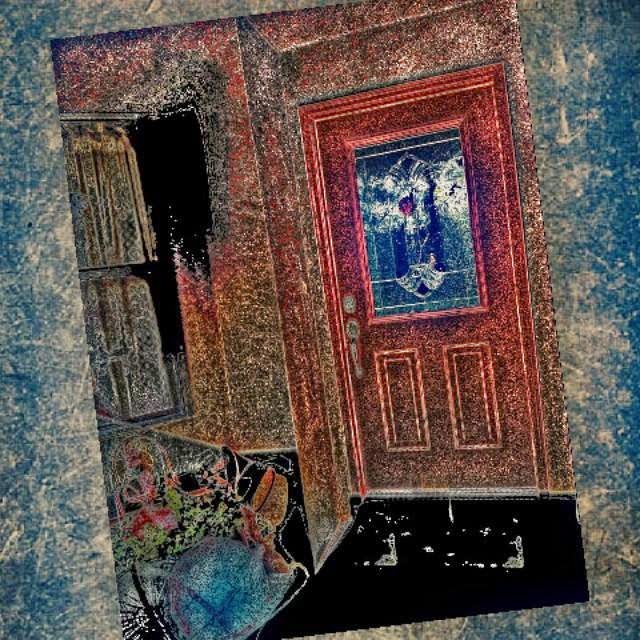 Sometimes, we're just jamming along and life has a way of slamming us in the face. Doors close. Did you know that the doorjamb bears the weight of the door through it's hinges? So, abandon fear before you become unhinged and open a door for someone today. Let someone in. Real life hinges on whether we allow God to bear the weight. When you open that door, more doors open. Stop by our door jam. Then, have yourself a jamming day. Signed, She Don't Slam The DoorJamb  Click here: The Door Of The Heart by the b.a.s.i.c. band 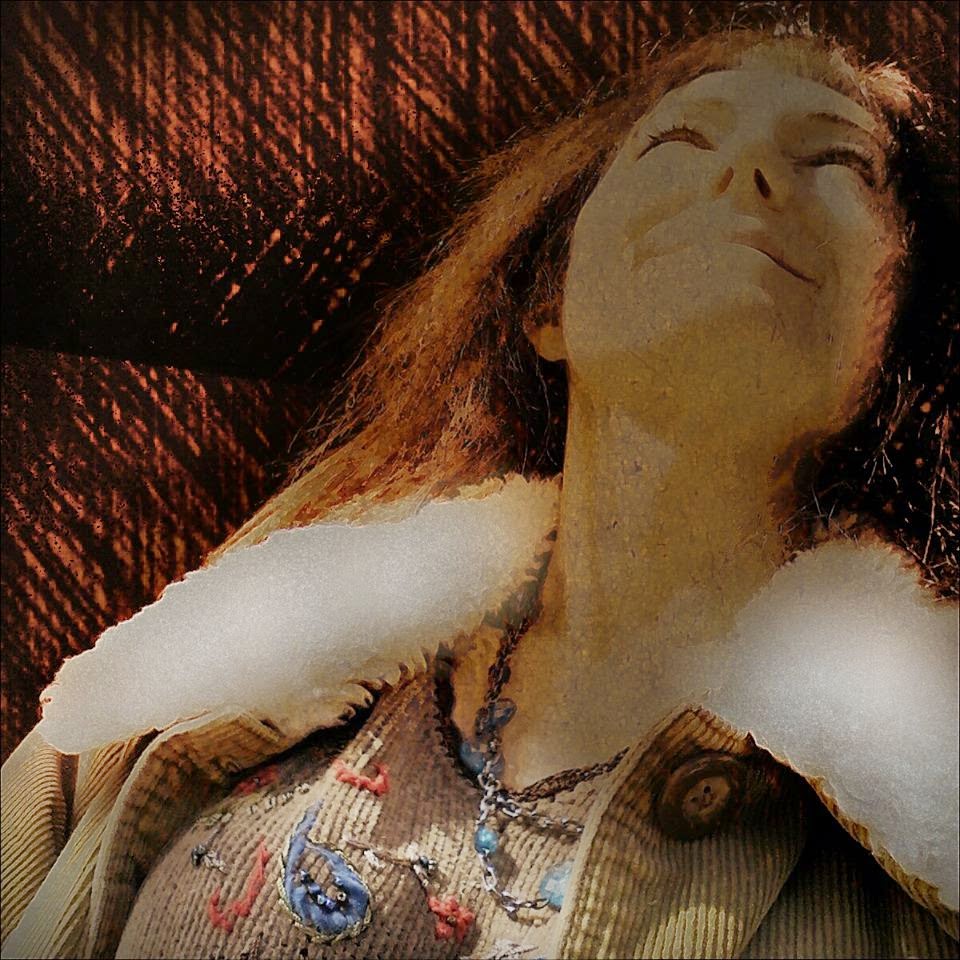 "Don't Be Afraid Of Uh... Frayed Remnants!" So, I thought I'd take a walk to get some fresh air and sun and wind to fight the frayed remnants of this flu. Got to thinking... The tapestry of my life isn't just a frayed remnant, but rather frayed remnants tightly woven to make a unique story. Oh, there may be a few loose ends, but they are being mended. Have a fun, tight night. Don't be afrayed to display your uh...frayed remnants. Together, they make you uniquely beautiful. What keeps my my pieces tightly sewn? I see God's loving threads in every remnant of my life. My remnants are worn and transparently authentic. Though, today, I tried singing some with my blues grunge voice and just started coughing. Uh..frayed, I'm not physically ready, like my soul is. I so have missed singing these past 6 weeks. Words can't describe. A song could! Just sayin'. Well, I need to sing to be whole, but I can't sing because I'm not wholly well. Wholly moly! What is that called? Signed, Keeping It Real... Tight 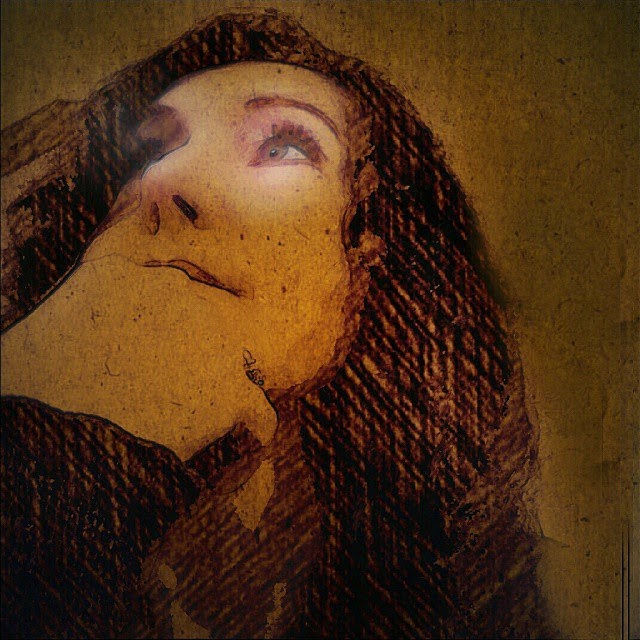 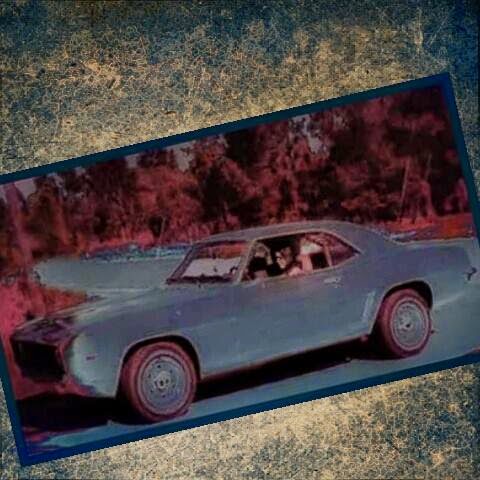 "Wheel Appeal!" I can't race right now. In fact, I've been moving kind of slow for the past month with this flu stuff. But, still in the race. Just had to make a pit stop. Truly the pits! PIMP LOL. So, I pulled out my old photograph of my '69 Camaro I got in the 80's to remind me I can still find my pace in the race! I traded it in for a truck to haul equipment for our band at the time. I used to race around all night singing in it. My free safe zone. And, right now we are playing and singing along with Brown Eyed Girl and other tunes while I post this. Jamming to anything is our free zone. Being real! And, God gives us the freedom to be real. Nope. Still not doing 360's or peelouts, but I'm driven. My gas? Hope, faith and love. If you want to appeal to others? Be wheel. I mean real. Peel out. I mean peel off! The unreal, fake layers.  SIGNED, The Race In Trace Has Wheel Appeal & Zeal To Be Real 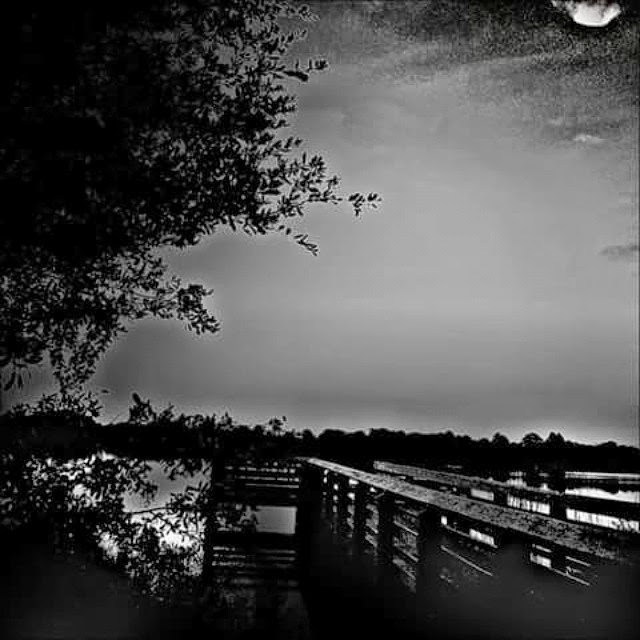 Feeling overwhelmed, OLDERwhelmed and illDUHwhelmed. Dark and quiet. Imagine that. But, I am confident God is still at work. Just thought I’d let you know we all get that way. And, especially, the older we get and when illness is upon us. Duh! We get dark and want to give up. With that I leave you with a fave scripture: In quietness and in confidence shall be your strength. Isaiah 30:15. Signed, Quite Quaintly Quiet & Daintly Dark

Trace's Place: Humor, Hope 'n Character (for every character): Getting Dumped On Espressoly! 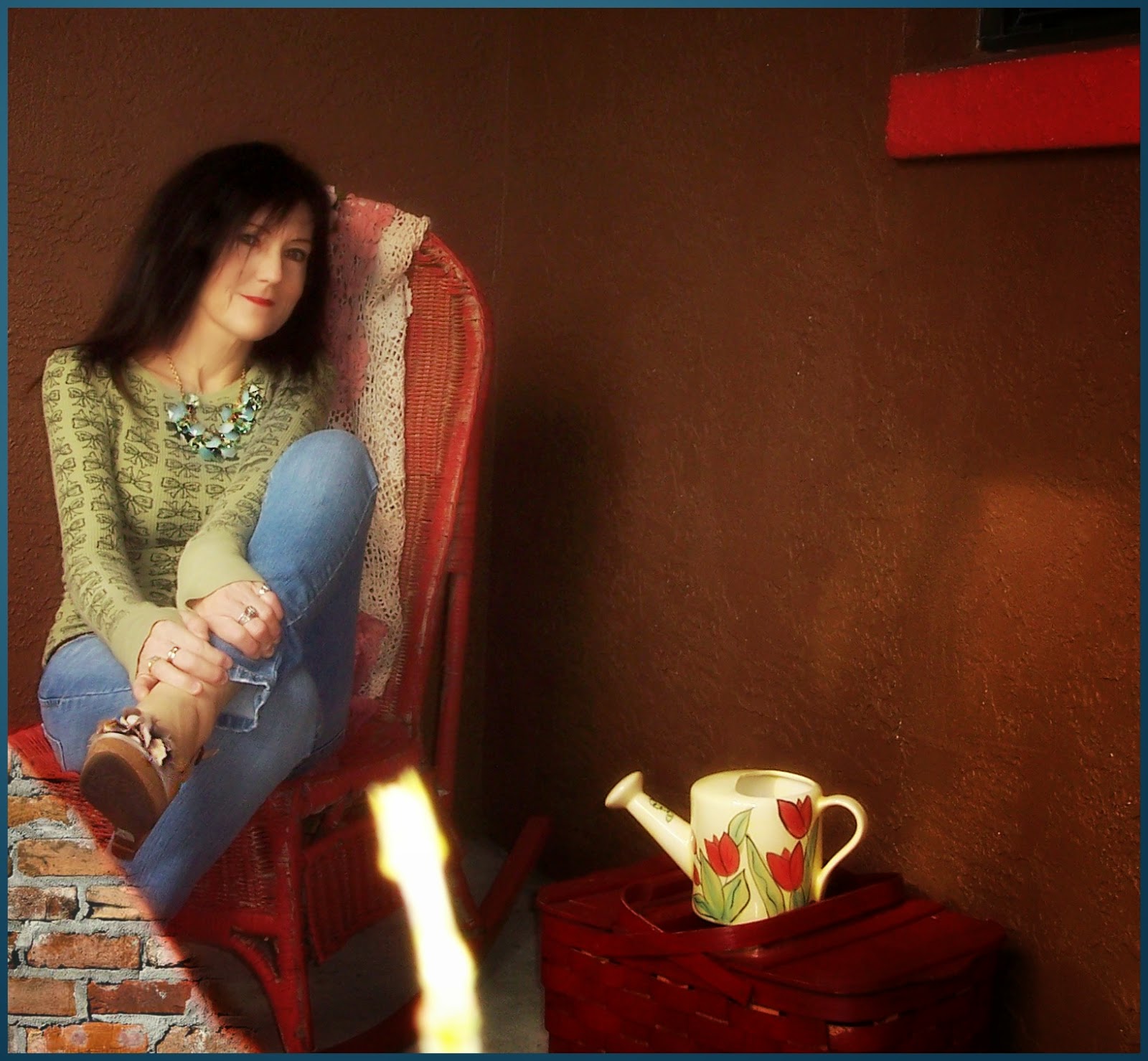 I got Espresso on my head! No. I didn’t make someone mad and they dumped their Espresso on me. Nope. But, I did pour Espresso on my head! Espresso hair color! PIMP LOL. I can’t have Espresso coffee anymore, but I can have the color. Yep back to my natural color. Espresso. It espresso’s the real me. Have a fun day! Don’t dump on anyone. Before you pour it out and espresso yourself? Take a moment and let it get from your head to your heart. Espresso it to God. Dump it out, pour it out, espresso it. Then pour some love out. But, no dumping on others. Keep your head. Make it any color you want. But, keep your head. On your shoulders. Not on your hips. No one likes getting dumped on. Except toilets. Oops! I’m espressoing myself and flushing. I mean blushing. Oh! And, yes. In my earlier days when I used to drink, someone hurt me real bad and was 2 timing and I found out. So, I dumped a pitcher on him in public. Then, I dumped HIM. Shocking. I could have handled it better, but back then? I didn’t know I could espresso any other way. Now? I know the Way. God. Go espresso yourself. And, Merry Christmas and Happy New Year. I am a few weeks behind.  Signed, She Don’t Dump & She Won’t 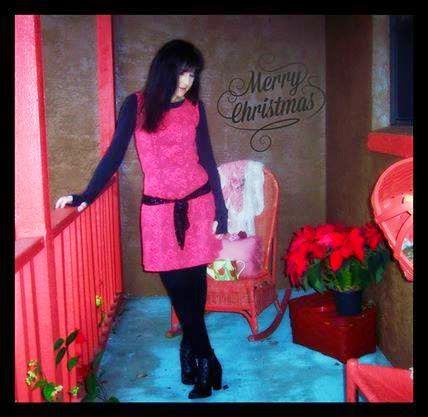 So, at this time of year, most everyone is running around. Me? Running around aimlessly?  Nah! I aims ta please, so I run around aim-morely, more or less. I aim more and I try to do it amorely. My aim? To be a gift. As He is to us. Hre’s more of my thoughts on giving of yourself. Giving up? Done it one million times (said like Dr. Evil in Austin Powers). But, now, giving “giving up” time to get comfortable? Never! (said like Arnold Swartzennegger in Terminator saying I’ll be back!) ‘tis the season of giving. Not giving up. You’ll shrivel up from giving up, but you will live it up when you give it up and give. Have a wonderful Christmas, guys. Here is our Christmas card and story and blazzy song to all of you! https://www.youtube.com/watch?v=YISqJCcifl0 Have a week of uh…more…amore. Just thought I'd share that I write off the cuff and sometimes my cuffs have feelings and love and all that amore stuff stained on them. Right above my fingerless gloves... Signed, She Lives Where & When She Gives & She Claims Ta Aims Ta Please 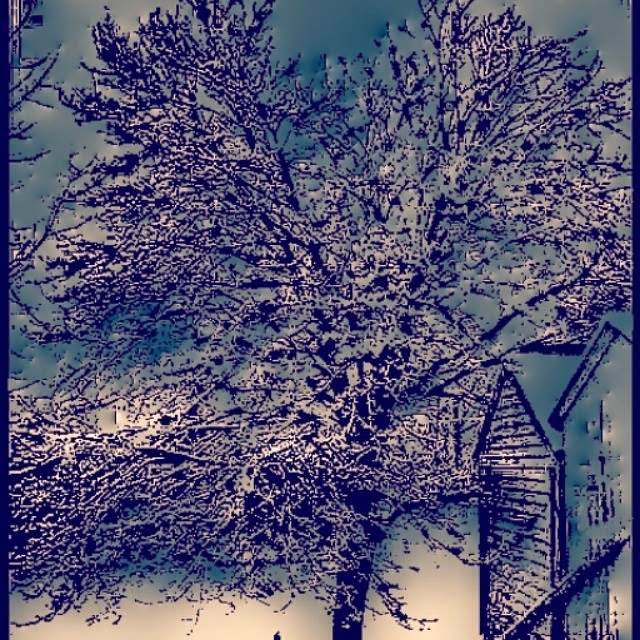 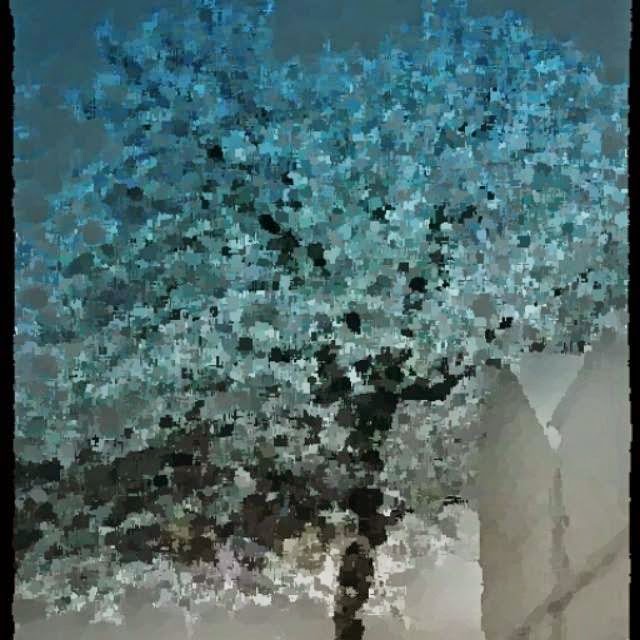 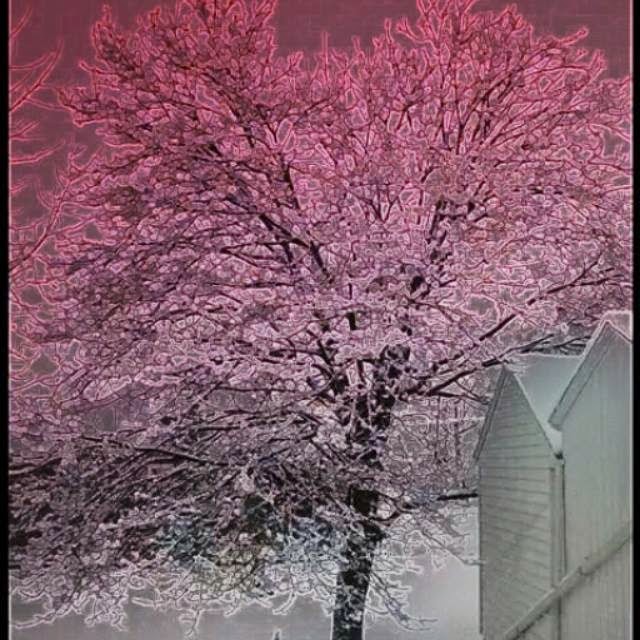 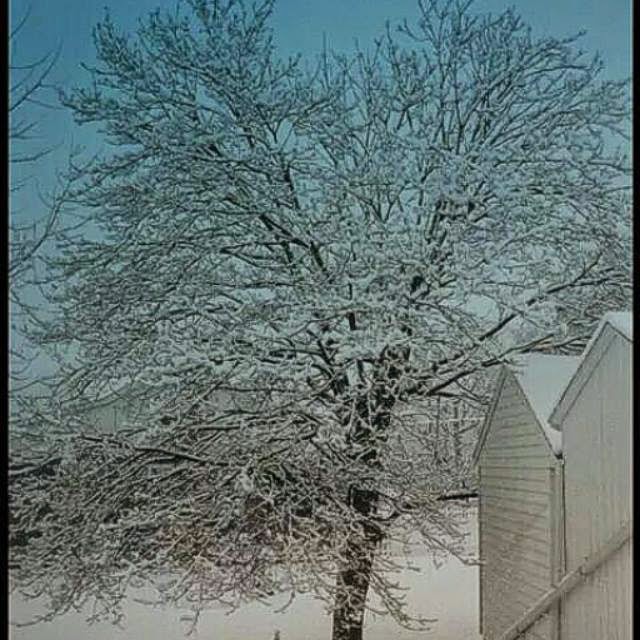 Well, it was too cloudy for us to get any good shots of Orion this morn, so I thought I'd post my favorite photograph I shot last time home and a few fun edits of where I grew up in Pennsylvania. I love the peaceful beauty feel of it. And, just like me having to make do and post a diff photo, that's how we have to do in life, sometimes. Make do is what we do. And, since many call me "T"? "Do"-T calls. Duty calls. You know, I haven't been feeling my best the last couple days, but T is making do by trusting God for His peaceful beauty amongst my ugly. PIMP LOL. And, I'm not snowing you. Have a peaceful beauty of a weekend. Even amongst the uglay! Sing on! Signed, She Finds Beauty Amongst The Duty (and doodie)